Been thinking about "core" and "kei" (lovecore, fairycore, clowncore (whatever the kids are up to these days) and vkei, fairykei, morikei), just the similarity of the naming. Obviously, Japanese's "Kei" (系) suffix has been around before the tumblr-originated custom of describing styles with some sorta word vaguley associated ended with "core", but I just think it's really interesting that there is now seemingly an equivalent in the English-speaking fashion world. "Kei" (style), has just simply been used to describe a style, but has often been used to explain a fashion subculture by using a word vaguely associated, take "Fairy-kei", for example. The word "fairy", from English, is the mythical creature of the same name, they have associated this concept of fairy with light pastel colours, and sparkly aesthetics, which is also in common to the sparkly feeling, pastel colour ridden fashion known as Fairy-kei. 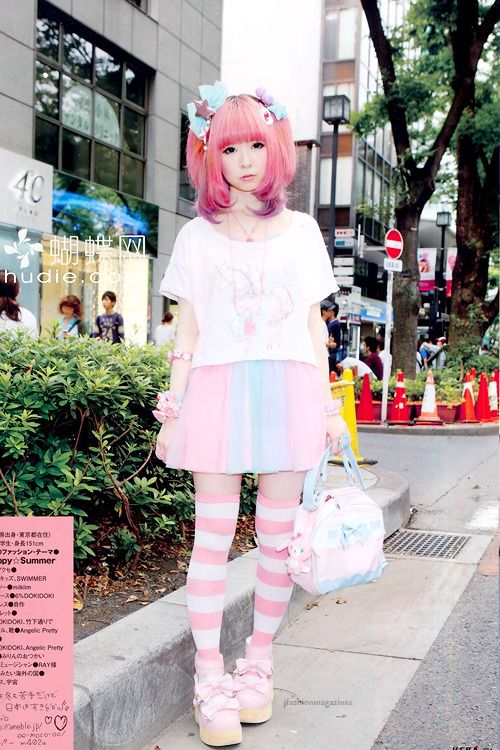 Incredible. I could talk about jfashion for hours, but let's leave that to some other time...


A similar style-naming phenomonen has occured with the suffix "core". It's modern usage originated (from what I know and have seen) from the way people would name "aesthetics" on tumblr. Usually, these had nothing to do with denoting a fashion style, simply just a way to label images they would share to their tumblrs. "Cleancore", "lovecore", "clowncore", and "kidcore" were among some of the original "cores". With time, the "core" suffixes and their respective aesthetics began to loosely describe fashion styles related to the aesthetic, yet their relation to the aesthetic was still the most important. A notable core, "Scenecore", describing an aesthetic loosely inspired by, and trying to encapsulate, late 2000s to early 2010s "scene kid" aesthetics. This core went beyong the aesthetic with it's fans' (?) desire to look like the scene kid myspace selfies they were at some point only posting for aesthetic purposes. From their attempts, a style which was notably a bit divergent from the 2008 aesthetic taste was beginning to appear, later supporting the importance to use the word "scenecore" as a label for their fashion which could not be properly described only by "scene". Similar phenomenons began to take place, cottagecore was no longer exclusively pictures of countrysides and stone-built dwellings, but now has guides on the silhouettes and what pieces you should wear to embody the style that cottagecore longs for. With a new way to label things, society has accepted these concepts as viable fashion styles, and tiktok has took this concept and ran and ran and ran... Twilightcore. Sidenote: "core" is also used as a suffix in music, which is usually, aside from rare cases, kept entirely separate from the aesthetic/fashion "cores". Here's a list of "cores" over at the "aesthetic wiki". It contains most of the cores, although I think a notable few are missing. A list of j-fashion substyles will have to do for "kei", as I can't find a good list of 'em, and there's probably too many to count, due to the nature of the word. Browse away! Thanks for reading my longwinded talk about the similarity of two suffixes in the fashion world. Fashion, and linguistics, for that matter, is a topic I enjoy talking about, so I hope I'm able to ramble like this again in the future.