The pokemon rival characters/friend characters really do hold a special place in my heart. From thinking about them whilst playing the games, reading the pokemon adventures manga, and seeing the difference between Gary (Shigeru) vs. Blue (Green), there's a lot to talk about them, but I'll try and keep it brief for the most part. This page will eventually include most of the Rivals/Friend characters, Manga, anime, and game adaptations alike. Also just so you know, my favourite is Silver lol, but currently Clara in the Pokemon Sword DLC has been cool too

This guy is a total fucking asshole. He calls you a loser and has 10 badges instead of 8 (in the anime(where he also has a personal cheer squad)) He’s the grandson of the pokemon professor, who forgets he even exists. His manga counterpart is less of an asshole, and is instead just a silent and mysterious, annoyed by everything, kinda tsundere type. Would be super cool if it wasn’t for his coolness levels being off the charts. Apparently if you’re so cool, you just become an asshole. Normal>cool>asshole. It sounds like I'm calling him an asshole in a mean way, but with my last statement I hope it clears up that I'm not. 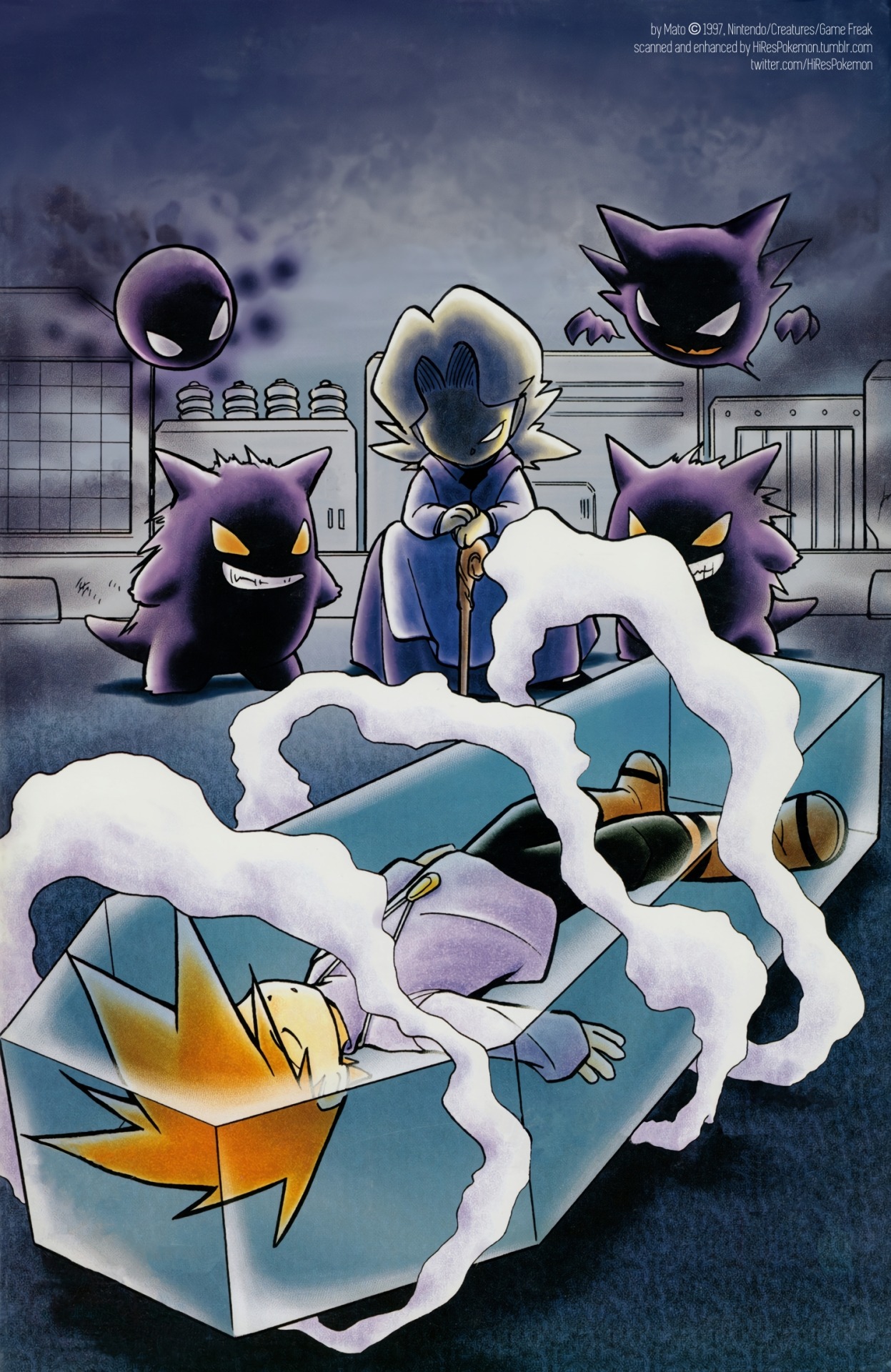 A character who is much more focussed on in the manga, and another one of my favourites. Green, originally meant to be the female player character in Pokemon Red/Green/Blue, she makes her appearance as a rival to Red in the manga, and later has an appearance in pokemon let's go! (finally!) that is in fact Green, and not Leaf (different character's lol). She is often deceiving and plots many schemes to get what she wants, she's not too evil though lmfaoo. Notably, her and Silver are part of the masked children, which is this whole thing in the manga. They have a sibling-figure relationship. 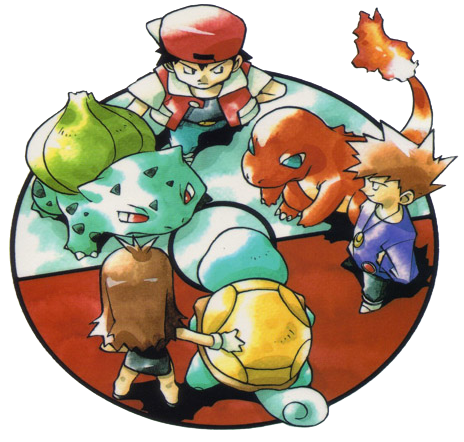 A character exclusive to the special/adventures manga, yellow is sneakily introduced by being a girl Red catches a ratatta for in viridian forest, then reintroduced as "Amarillo de Bosque Verde". She disguises herself as a man, under the guidance of Green, to go on a secret mission to find Red and bring back Pika to him. Not sure if there really was a reason to disguise herself, what did she have to hide? Who knows. It was still an incredibly enjoyable arc of the manga to read. When I think about Yellow, first I think of my friend who loves her, then I think about the most peaceful pokemon journey and the most peaceful images I've ever seen. The same warm vibe the first Hunter x Hunter 1999 opening gives off is the same vibe Yellow has. 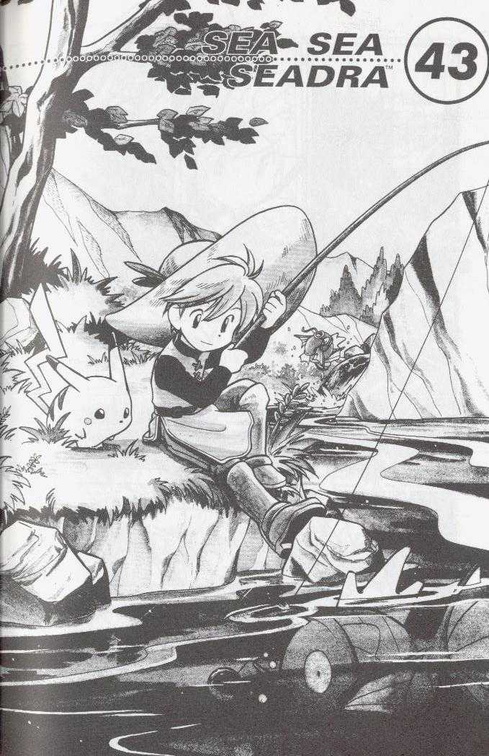 One of my favourite fictional characters, he could have his own shrine, he’s the rival in G/S/C HGSS. He’s introduced as being a literal criminal who steals a live creature from the laboratory, or maybe he’s saving it from the lab? Who knows. Anyways he meets you and calls you weak and shit and says he hates weaklings, so you snitch on him and give the police a sketchup (Gold does so comically in the manga). Anyways, in FRLG, it’s hinted at by someone that silver is Giovanni's son. 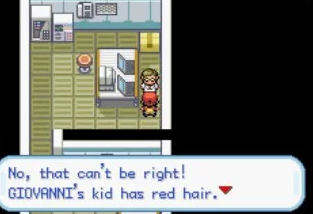 This is played up more in the manga, silver getting kidnapped by some team rocket members and put into a team rocket heir outfit 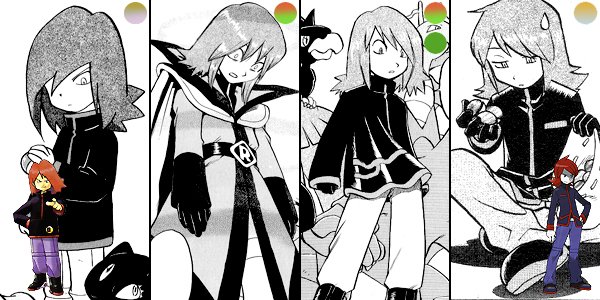 lol wut. In the video games this is confirmed by the celebi event in HGSS. Anyways silver is grr evil in the video games he hates weak people and pokemon, but in the post game of HGSS he appears to have changed, one of professor elm’s assistants even say that he was worried about the pokemon silver stole, but then reveals that silver later came to return the pokemon, although Elm let him keep it, saying the pokemon had grown fond of him. Aw! Earlier this year Silver’s name was finally confirmed as game canon (not just manga canon), by a Pokemon Masters twitter post.

here are some images from a corocoro magazine scan, I believe. I can't remember where I found these, but I still feel inclined to share. 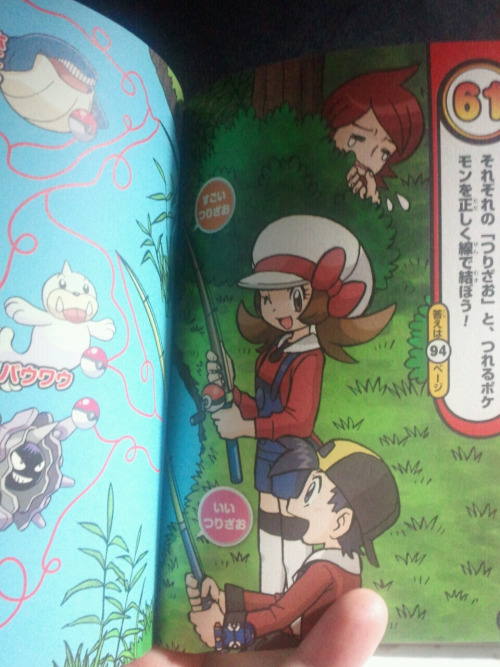 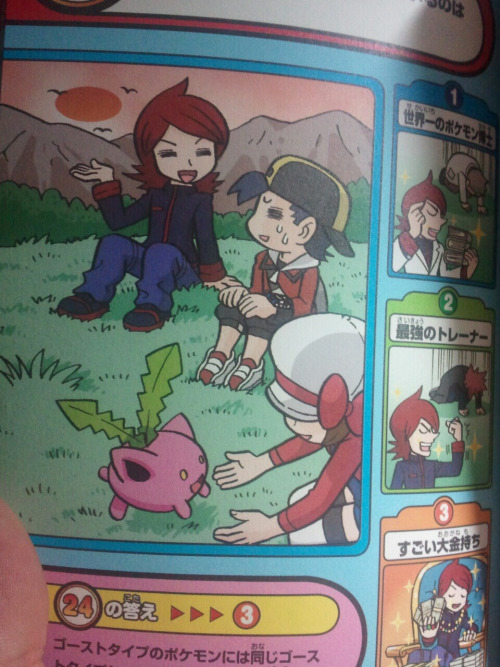 Uhh yeah. The rival is the other player character, and also wally. At the same time. Anyways these two (brendan, may) are the professor’s assistants. They get a pokedex, become your vaguely motivated rival. Yeah. Now that I think about it, there isn’t much to them. Uhh you go on a cool space center date with them in ORAS. Wally is this kid trying to be a good pokemon trainer, but he has asthma so walking across an entire region is kinda hard for him or something. Also he lives in an ashy place so I’m not sure if that’s good for his health.

Another character exclusive to the Pokemon Adventures/Special manga, whom I share a birthday with lol. He's super short, so he styles his hair up and wear's special shoes(contraptions?) to make himself appear taller, funny as hell to me when I was younger, god same Emerald, I too am insecure about my height. He has many gadgets and somewhat dislikes pokemon. A funny amusing character.

This guy is gonna fine you a million dollars if you’re late to the lake, where he is waiting so you can find a rare pokemon so you can get rich. Instead you end up borrowing the professor’s pokemon and end up going on a journey from there. This rival is enjoyable actually. He’s very high energy, runs super fast for no reason, he’s just having the time of his life and I want to be his friend. In the manga he’s also fun, and does comedy with Diamond.

So cheren is this guy who’s super smart and actually hard to beat sometimes (I remember a few battles where I got stuck for weeks). He looks like dib from invader zim. He later becomes a gym leader in BW2 and ditches his glasses. For some reason I don’t remember what he was like in the manga all that well. I know he exists. Bianca is your other childhood friend. Both her and cheren destroy the fuck out of your room and your nintendo wii, battling in your room. Bianca stops journeying halfway through the game, because like Wally, she has overprotective parents. Unlike Wally, she doesn’t get this cool thing at the end where she’s strong. She just simply stopped her pokemon journey, which makes me hate her fucking parents. She eventually has her redemption arc as an assistant pokemon professor in BW2.

Why is this guy's name N what the fuck. 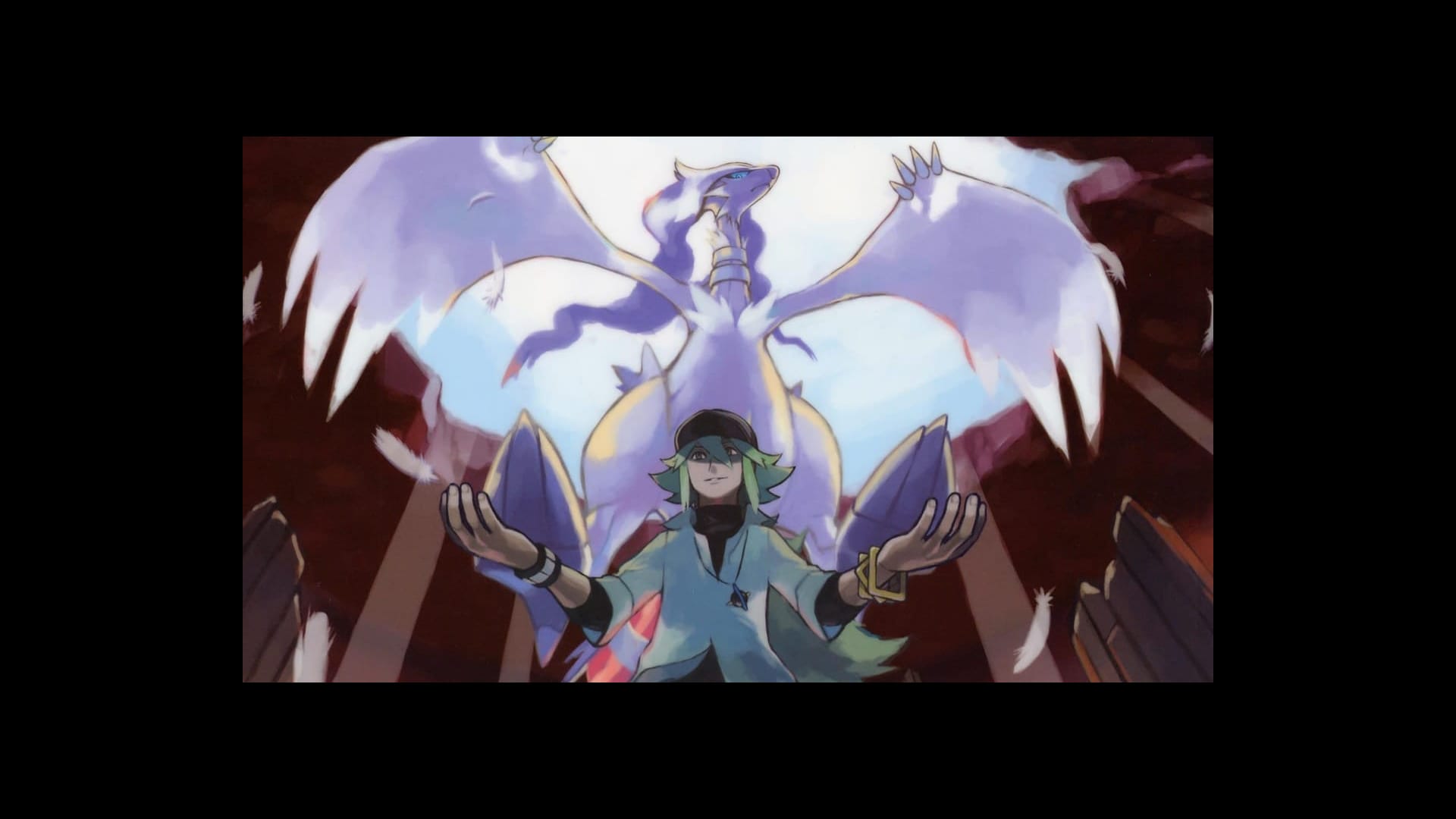 Once in junior high shop class the shop notes answer for a question was “Hugh”. That was the last time I thought of this guys’ existence. So his dumbshit little sister gets her purrloin stolen by team plasma so we then journey to get their pet cat back. Also I’m less bitter about all of this than I sound. My friend just completed their SW/SH pokedex while I was writing this so thats super cool to me. Anyways yeah that’s Hugh. He seems cooler than he is idk

Serena and Calem are my least favourite pokemon rivals. I don’t want Calem to call me “Neighbour” and I don’t want Serena to be awfully shoehorned in as a love interest for Ash (They’re childhood friends my ass, pack it up Naruto/Hinata relationship). Shauna I remember being okay. Definitely was my favourite. She kinda flirts with the player character sometimes. Bi rights. I don’t remember much about her. She’s one of those cute characters. Trevor is a character. He reminds me of a character from Yokai watch. I can’t remember much about him either. Tierno. Tierno likes to dance ? That’s all I remember. Him and Trevor hang out. Oh yeah wooo that’s the rivals. I didn’t enjoy x and y that much, also I didn’t read the manga yet.

Wow I love these characters so much. Hau is the grandson of this Kahuna guy, and he hopes to do the island challenge and be as good as his grandfather. He likes malasadas and meowing to meowths. Incredible, I love him. Lillie has this rare pokemon she’s smuggling. Nebby get in the bag!!!! She has an abusive mother who also is in charge of an evil organization. She lives with the professor. It is later revealed Gladion is her brother. Gladion is, in the Japanese text, a “chuunibyou”, in english, “emo”. 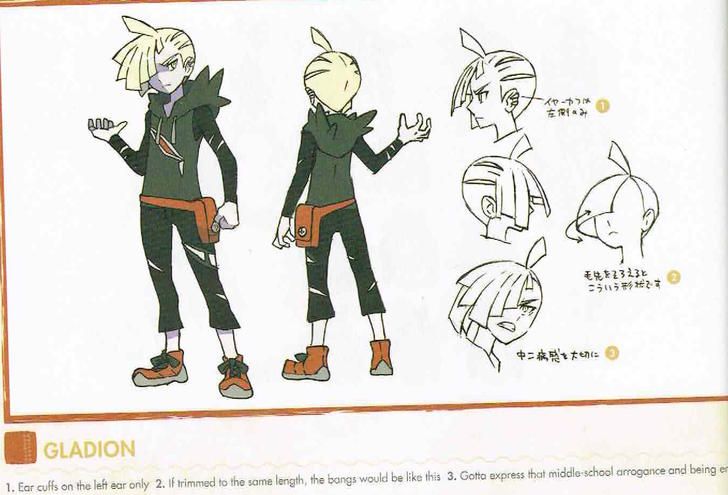 Yeah. He’s a part of team skull, for personal reasons. I love all these characters and I love sun and moon. I have not seen the anime or read the manga yet.

Hop is the childhood friend archetype and he’s a sweetheart. He wants to be a good trainer, as strong as his brother Leon, the champion of the region. You and him see some legendary dogs in a forest. Later in the story he begins doubting himself and feeling bad about himself, as a trainer, comparing himself to the player and his brother and feeling defeated. I want to give him a hug in moments like this. Bede is an asshole rival. He thinks he's super good. He fails and an old lady takes him under his wing against his will and makes him an expert in fair types and wearing more pink. Eventually he is fine with this. … very weird character arc but yeah. Definitely some cool characters. Still haven't read the manga.
Anyways, this is just my take on the pokemon rivals. For actual accurate and helpful information, I'd recommend looking on bublbapedia or Serebii. Also I forgot N. Whoops I'll add him soon.